The layer concept in Helix supports the architecture by making the dependency flow completely clear everywhere in the solution, in Sitecore, in Visual Studio and even in the file system. Furthermore, the layers provide a structure that is extremely suitable for creating and maintaining solutions of any size and steers both new and experienced developers to producing more maintenance-friendly and clean code.

Note that the layers in Modular Architecture are not equivalent to the layers seen in 3/n-tiers architecture even though they bear resemblance in terms of dependency direction.

Even though layers are a conceptual construct in the architecture, layers are physically described in the implementation by folders in the filesystem, Visual Studio and Sitecore, along with namespaces in code and layers defines in which direction modules can depend on other modules.

Layers helps control the direction of dependencies – the importance of which is described by the Stable Dependencies Principle or SDP, which is one of the cornerstone principles in Modular Architecture:

The dependencies between packages should be in the direction of the stability of the packages. A package should only depend upon packages that are more stable than it is.

If dependencies are not controlled, then you can end up in a situation where a change will unintentionally affect seemingly unrelated parts of the solution – in effect, an unstable codebase - and an unstable code-base will make your solution hard or impossible to maintain over time.

Sitecore Helix defines three layers: Project, Feature and Foundation. Each layer has a very clearly defined purpose. In order to structure your Sitecore implementation properly, it is important to understand the principles behind these layers.

Practically speaking, the three layers are typically defined in Visual Studio as Solution folders, in the file system and directories and in Sitecore as corresponding content type folders.

These typical Sitecore locations contain layer folders out of the box:

Depending on your needs, you may want to create folders in other locations to indicate the layer/source of the items contained there:

The Helix Examples use the built-in Sitecore layer folders for organizing items, and serialize items from them using either Sitecore TDS or Unicorn. (See Managing items in development)

In Visual Studio, the layers are defined as solution folders:

On disk, in most solutions the layers are defined as folders under /src:

The builtin Sitecore layer folders under Templates and Layouts: 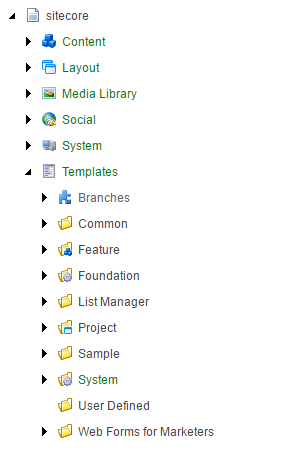 The Project layer provides the context of the solution. This means the actual cohesive website or channel output from the implementation, such as the page types, layout and graphical design. It is on this layer that all the features of the solution are stitched together into a cohesive solution that fits the requirements. Thus it is often referred to as the compositional layer.

Each time there is a change in a feature, a new one is added or one is removed, then this layer will typically change. The layer also brings together the concrete graphical design of the solution, which means that in terms of the Stable Dependencies Principle, the modules in this layer are unstable. The most unstable modules in your solution and thus, remembering the Stable Dependency Principle, should have the fewest dependencies on it.

The Project layer is typically small and contains few modules, often determined by the number of tenants in the solution and their needs (see Multi-site and multi-tenant).

Typically, in a single tenant solution there will only be a single module, namely the specific website or requirements that fits the needs of the tenant, and this will contain little or no pre-compiled code but instead consist of mark-up, styling, layout and templates of the item types in Sitecore which the editors can create (see Template types).

If working with Sitecore Experience Commerce, the Project layer is where you will find the Commerce Engine application project. It will then assemble all of its required functionality through references to modules in the lower layers.

Project layer modules can also be used to expose one feature’s functionality to another (that is, compose features together), without having to directly make one Feature module dependant on another, for example through the inversion of control or pipeline patterns. However, be careful not to implement actual feature-specific business logic in the Project layer in this process.

The Feature layer contains concrete features of the solution as understood by the business owners and editors of the solution, for example news, articles, promotions, website search, product listings, shopping cart functionality, etc.

Each Feature layer module has to strictly conform to the Common Closure Principle.

Classes that change together are packaged together.

This principle ensures that changes in one feature do not cause changes anywhere else, and that features can be added, modified and removed without impacting other features. For example, in a Sitecore context, it is important that all Sitecore items – such as the interface templates and rendering items – are managed, versioned and packaged with the views and code files of the feature. This can be done by serialization (see Managing items in development). Likewise, changes to configuration files (web.config or Sitecore .config include files) must be managed as part of the feature module (see Configuration and settings). The same applies when working with Sitecore Experience Commerce, if you have a module whose functionality spans both the website and the Commerce Engine, then all of it must also be managed together as part of a single feature module.

A strict awareness of dependencies within the Feature layer is very important. One Feature module must never depend on another Feature module as this certainly makes you lose many of the benefits that that Modular Architecture provides, such as the overall flexibility and reliability of the solution. This principle can sometimes be challenging as functionality in some features often rely on data from other features and you will have to rely on architectural patterns to get around this. For example, website search will rely on data from other modules as part of the indexing and search results rendering. To get around this a typical approach would be to add the concept of indexing and rendering search results to a foundation level module (see Layers) which the Search feature module then utilises. Other modules can then offer their content to search by plug into the indexing and rendering functionality in the Foundation module – through for example an inversion of control pattern.

Note that although several modules in the Feature layer can be grouped together semantically (see Modules) this only suggests a conceptual coherence between modules – not in any way a technical dependency.

The lowest level layer in Helix is the Foundation layer, which as the name suggests forms the foundation of your solution. When a change occurs in one of these modules it can impact many other modules in the solution. This mean that these modules should be the most stable in your solution in terms of the Stable Dependencies Principle.

Conceptually, it is helpful to think of all the frameworks and software you rely on in your solution as foundation modules. This includes the Sitecore platform, .NET and other technology frameworks such as Bootstrap, Foundation, jQuery etc. In the context of your implementation, these are typically very stable modules but when they do change, it often requires a more rigorous testing process and potentially a lot of changes to your Feature and Project layer modules. By controlling dependencies even to these frameworks, you can greatly decrease the time needed on technology upgrades and increase the stability of the solution.

In the Habitat example, the Sitecore.Foundation.Theming module implements most of the CSS stylesheets for the Habitat website. This might be seen as a very Project layer specific functionality but on close inspection, you will notice that the CSS of the module merely pulls in, wraps and extends the standard Bootstrap framework, and thus exposes an implementation specific design framework for all Feature modules to use. Any website or page specific CSS additions can be added in the Project layer modules – just as you would if you are styling on top of standard Bootstrap, Foundation or other frontend frameworks.

CSS is the single most common cause for implicit dependencies between modules, so be sure to have a strategy for how to deal with the graphical design implementation in your Helix compliant solution (see Visual Design and Theming).

Typically, modules in the Foundation layer are either business-logic specific extensions on the technology frameworks used in the implementation, or shared functionality between feature modules that is abstracted out into separate frameworks.

Typically, modules in the Foundation layer are conceptually abstract and do not contain presentation in the form of renderings or views - as these are to be considered concrete. Some framework modules might still contain mark-up in code though, examples being precompiled web-controls and html helper functions, but in order to control dependencies, any Feature or Project specific knowledge should be passed as parameters from the depending module.

The Sitecore.Foundation.Indexing module in Habitat allows all Feature modules, and their content types, to participate in the search functionality of the solution. This means that a new Feature layer module can be exposed through the search pages of the websites by simply implementing the interface or configuration defined in the Foundation layer module – and without the Sitecore.Feature.Search module knowing anything about the new module or its content.

The dependency graph of packages must have no cycles.

Increasingly it’s common to include a Helix layer which defines infrastructure (e.g. Azure Resource Manager templates) or that handle consolidating deployments to a particular service in your Sitecore environment. Names for this layer in the community include Infrastructure, Environment, and Deployment. At this time there is no recommended standard for naming this layer.

Some of the Sitecore Helix Examples use a small Environment layer for projects which handle deployment to the main Sitecore Website/Platform service, either using Sitecore TDS or Helix Publishing Pipeline.