Most aspects of rights and access are defined in the content area of the sites and therefore in the Project layer modules or directly in the production content itself.

These types of rights and roles could be called Organisational Rights or Organisational Roles, as they typically will define the organisation or groups to which the users belong, and thus the hierarchical content they can access – and which rights they have to it.

But there are aspects of security that reach into the feature and foundation modules – and which therefore needs to be addressed in the modular context of Helix. This is particularly true for individual fields, as these are defined in Interface Templates in the feature and foundation layer modules. It is also true for configuration settings, and even specific tools and editor extensions within Sitecore that are contained within the feature modules.

These types of rights and roles are called Functional Rights or Roles, as they define which types of functional access the user is given inside for the hierarchy that he or she can access.

Functional Rights should be defined on Functional Roles owned by the Feature or Foundation layer modules which defines them. Certain Functional Roles and Rights will be managed on the project layer, for example which Page Types an editor can create, which languages or which workflow states.

This type of functional and organisational combination makes it possible to define functional roles and rights on the features which defines them, while staying independent of how the content is structured.

The Habitat example site defines functional roles for the Feature and Foundation modules that define access to fields and configuration on the module. It also defines organisational Roles for the Habitat project. 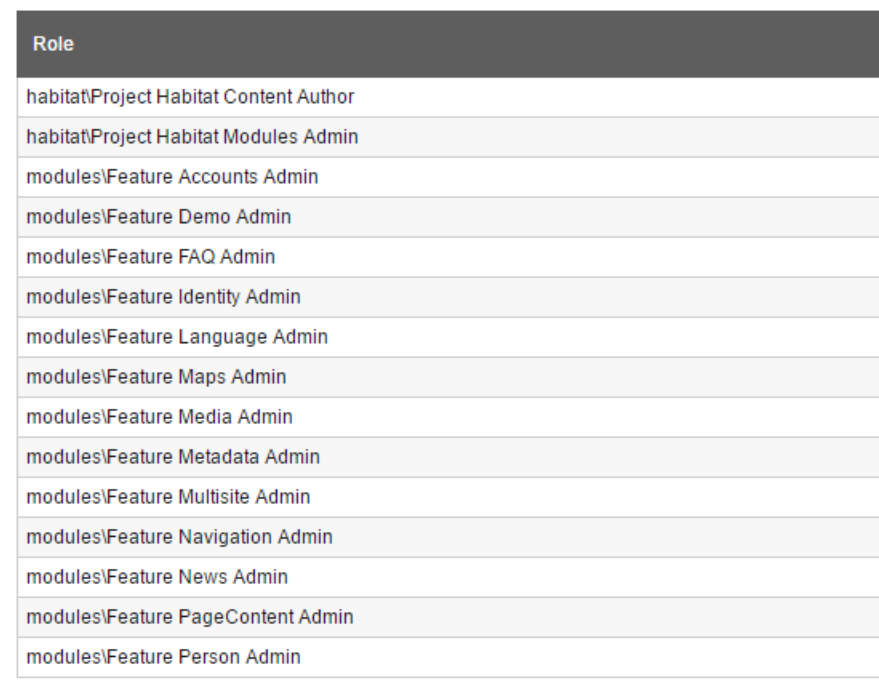 Feature roles are prefixed with the layer and module name followed by a descriptive name for the role, for example sitecore/Foundation Accounts Admin or sitecore/Feature Maps Editor.

The fact that a user in one domain can be a member of roles from another domain can be very useful to separate rights in multi-tenant solutions or between modules.