One of the most common points of feedback on Sitecore Helix regards its use of Visual Studio Projects to organize and set boundaries between modules. Concerns about this practice include:

The result is that some Sitecore solution architects are inclined to structure their Visual Studio solutions with fewer projects, while still following Sitecore Helix conventions in .NET namespaces and in the dependencies between classes. Effectively, modules have “logical” boundaries rather than “physical” boundaries.

You should apply Sitecore Helix in a way that you see as best for your customer, team, solution, and requirements – it is not a rulebook. However the reasons for departing from the conventions should be understood, as well as the potential for accumulating technical debt when doing so. The goals of maintainability and long-term value should drive these decisions.

It is true that adding projects to a Visual Studio solution can increase Rebuild times due to the overhead in building each project. However build times, with well structured dependencies, can be lower for large numbers of projects because projects that are unchanged do not need to be built - so less overall code must be compiled. Having multiple projects in a solution also means that MSBuild can use multiple cores when building the solution, because each project’s compile is single threaded.

If slow builds or the overhead of creating new Visual Studio projects are the main concern with the conventional Sitecore Helix project architecture, you might first consider whether misapplication of the Sitecore Helix Practices is actually the root of the issue, or whether better tooling might resolve the concern.

In Sitecore Helix, the scope of a module should be a business domain. A common mistake when applying the practices is to define modules based on Atomic Design, with modules defined for individual controls rather than for related business features and responsibilities. This can quickly grow the number of Visual Studio projects in a solution and make them unmanagable. Ensure your modules are appropriately scoped. Controls and functionality that change together should be packaged together.

4.2.1.2. Does your solution contain projects you do not need?¶

Does your solution contain empty unit test projects for one or more modules? This might be the case for simple modules which only contain configuration and/or View renderings. These add no value and unecessarily slow down your builds.

The same applies for TDS projects with no items. If these exist only to build/deploy a module, consider a single build-only TDS project with multiple Source Web Projects.

The TDS version of Helix Basic Company uses a single TDS project for file copy / packaging, and additional TDS projects as-needed within each module. It also only has test projects for modules with testable logic. 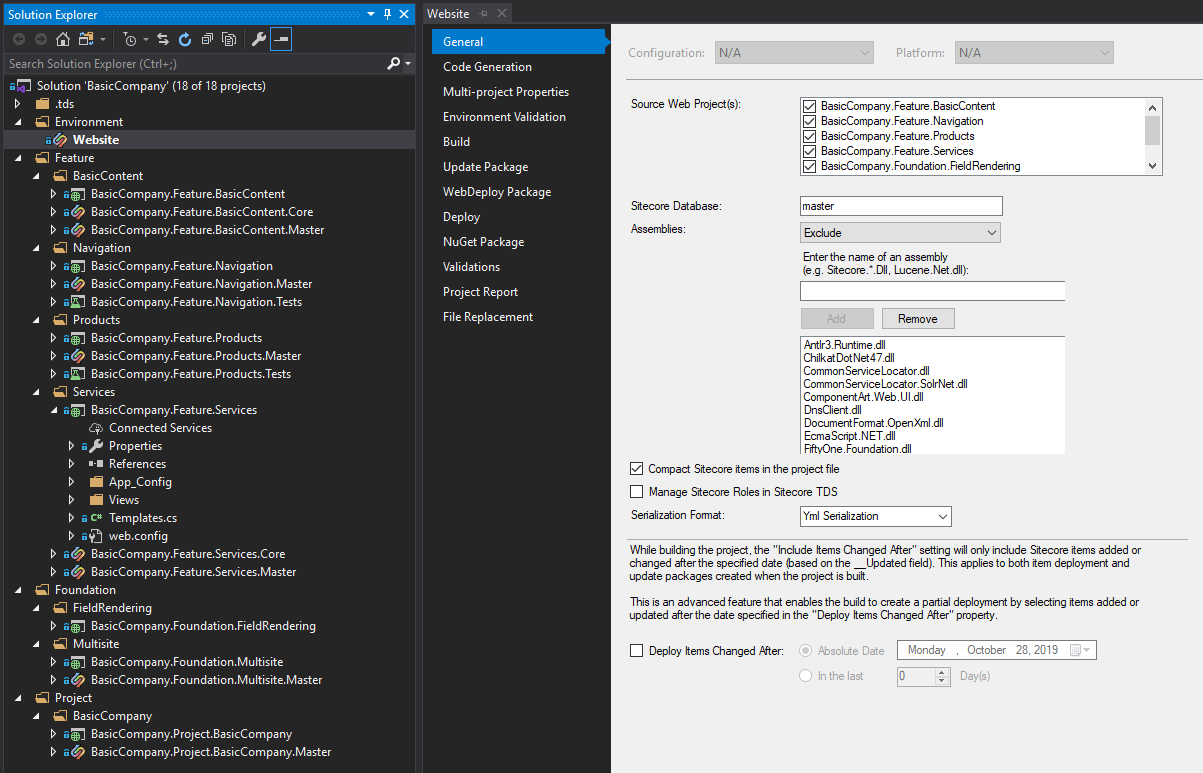 4.2.1.3. Are there inefficiencies in your build scripts?¶

Previous versions of Sitecore Habitat included gulp scripts which built each Visual Studio project individually, rather than the entire solution at once. This could lead to much slower builds as project dependencies could be built more than once. Ensure your build scripts target the VS Solution or a single “root-level” project.

Newer versions of Sitecore Habitat have an updated gulpfile which targets the entirety of the Visual Studio Solution for builds.

You can alternatively use Sitecore TDS or Helix Publishing Pipeline for local deployments, as seen in the new Sitecore Helix Examples.

4.2.1.4. Are there other tooling improvements which can help?¶

If your primary concern is the overhead of creating projects which follow the Sitecore Helix conventions (naming, filesystem structure, etc.), then you might consider some of the community tools which make this easier by providing project “templates” which save you some clicks. Take care when using these however that you remove any generated projects which the module does not need.

Recent improvements in the Visual Studio project file format can reduce the effort required for external dependency management, and potentially improve build times. The PackageReference format for NuGet references is a significant improvement, and can be used with .NET Framework ASP.NET applications, though with some limitations. SDK-style projects further reduce overhead of the project system, and are being used successfully in the community with Sitecore projects. However SDK-style projects are not officially supported by Microsoft with .NET Framework ASP.NET applications, and thus you may require some MSBuild expertise on your team if you wish to use them.

Newer versions of Visual Studio are also much better optimized for opening large solutions. To further improve the performance of Visual Studio and reduce build times, you can also consider using the Filtered Solutions feature of Visual Studio 2019 to reduce the number of projects open when working on a particular module.

Finally, you should ensure that there are no MSBuild customizations in place which force projects to build even if no files have changed. This could include BeforeBuild targets.

4.2.2. The role of Visual Studio projects¶

Aside from the pragmatic issues, the architectural question at the root of this decision is the role of a project/assembly in Visual Studio. This is essentially the subject of Robert C. Martin’s Principles of Package and Component Design, which contain the underlying principles that Sitecore Helix is based on. Based on these principles, Visual Studio projects form a “physical” boundary and unit of change for modules in Sitecore Helix.

Martin however makes an assumption that modules (packages) are released / deployed independently. Due to the versioning and testing complexity this would put on the typical Sitecore solution, Sitecore Helix actually discourages partial deploys of modules, meaning that the unit of release is the entirety of the application. While modular deployment may be a requirement for some very large solutions, if you are not deploying and versioning these assemblies independently, it is a valid question as to whether the modules really merit their own Visual Studio projects.

The modular architecture practices of Sitecore Helix though are meant to improve solution maintainability and dependency management. It’s easier to track and manage the dependencies to and from a module, as they require an explicit project reference by the developer. While these are easy enough to add, is an additional step and something that could be easily flagged in a code review.

The convention of using a separate web application project for each module (which deploys to Sitecore CM/CD) also means that all the code and configuration related to a module are located in one place. Combine that with the module filesystem and solution folder structure, and you also have the items, tests, and other related code for that module. Practically, it’s very easy for a future developer to find/discover the code related to a desired system change.

It is true that FxCop rules can be used to enforce Sitecore Helix dependency rules without separate projects, effectively giving you a “logical” boundary between modules to help enforce dependencies. However the loss of physical Common Closure and the potential maintenance impact should still be considered when taking this approach.

4.2.3. How to structure when consolidating¶

How you consolidate the projects in your solution will ultimately depend on the issue(s) you are attempting to address, and your view on the purpose and role of Visual Studio projects.

In all of the approaches above, you will need to consider the structure of your tests, serialized items, and projects for additional Sitecore services as well. At the very least you should aim to retain the “logical” boundaries betweeen modules by mirroring the filesystem and namespace structure within each of these.

It’s strongly recommended that you use tools such as FxCop rules and Sitecore TDS Validation to enforce dependency rules between your modules if you consolidate Visual Studio projects in any way.

Sitecore Helix is not a rulebook. You should be pragmatic about applying its conventions rather than religious. When deviating from them however, you should always:

Any time you deviate from standard Sitecore Helix conventions, it’s a good practice to document your reasons for doing so, what your solution-specific conventions are, and what the resulting technical debt may be. This documentation should be placed in the repository itself in a README, Helix.md, or similar document.

The consolidated version of Helix Basic Company demonstrates the extreme example of using a single web application project for the entirety of the solution. 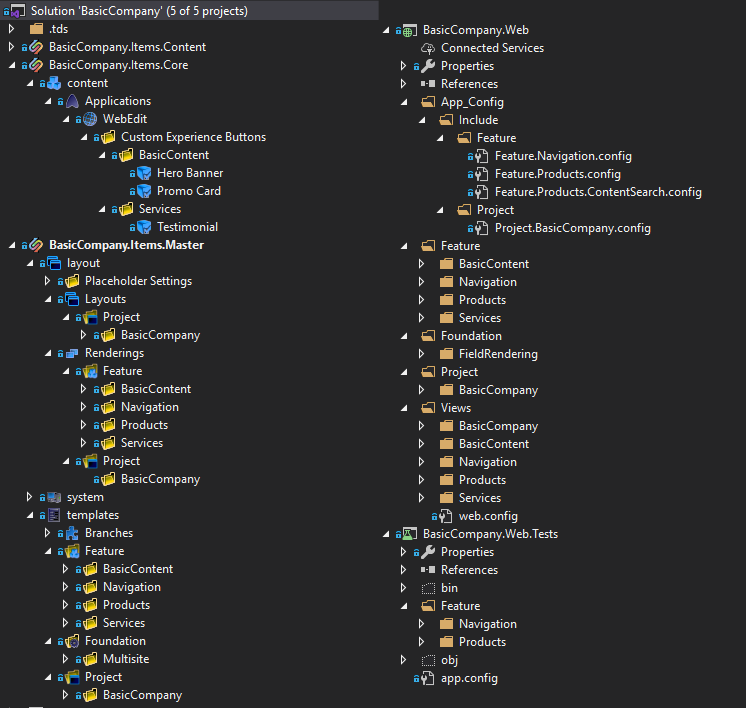 Note that additional projects are needed for tests and serialized items. A consolidated structure with Unicorn would similarly need a separate filesystem location for all serialized items. Also notice that even within the Web project, the module configuration files are intermixed.

It is ultimately the responsibility of the Solution Architect to weigh this loss of “Common Closure” and potential maintenance impact, vs potential improvement in build times, deployment, etc.